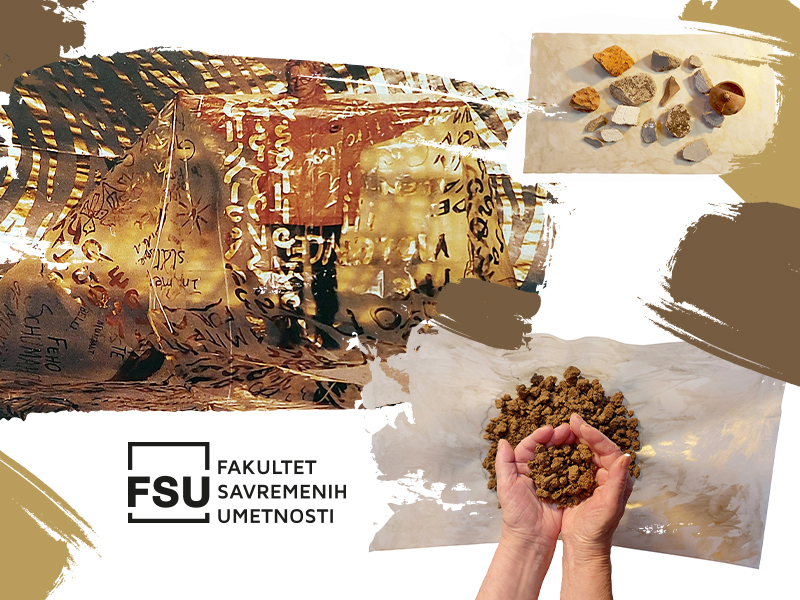 New exhibition at FCS Gallery: “Empty Promises and the Power of the Individual”

From Friday, November 19, through December 3, the Faculty of Contemporary Arts’ Gallery will be hosting another exhibition. This time, the featured artist is Ljiljana Bursać.

This show by Ljiljana Bursać is an individual contribution based on personal experience in an uninterrupted chain of empty promises… It is a land art of sorts, in a decimated landscape, possible only if you… feel the ground…

This work encompasses two main modules. The first comprises a scroll with asemic writing in gold on tracing paper. The second module contains fax tape with prints of documentation referring to the Art Forum, an NGO founded by the artist in order to realize her projects based on the idea of preserving and advancing the culturological standards of multicultural populations living in isolated regions. The fax tape contains traces of all the attempts, pleads, requests and protests that the artist addressed to the relevant institutions, asking for assistance and understanding towards the survival of the projects. Despite the green light from UNESCO, the Art Forum ceased to exist in 2008, due to multiple obstructions. Empty promises came from all relevant institutions of the Republic of Serbia and a number of international funds generally interested in this realm.

The founding and fall of the Art Forum

Starting from the chronology of its inception, from the performance “Bridge of Light” in Kosovska Mitrovica, shown from December 1999 to January 2000, the program of the Art Forum (2003–2008) had been initiated and maintained thanks to the patronage of the Serbia and Montenegro National Commission at UNESCO and the UNESCO’s financial aid from the Participation Program, rank 1. Within this time, the Art Forum used the window of opportunity to involve a number of artists and scientists from Serbia and abroad.

Through the years, the calls were answered by over 120 renowned artists and experts from Serbia, Montenegro, Bulgaria, Denmark, Russia, Greece, Poland, Ukraine, Hungary, Romania, Republic of Srpska, Bosnia and Herzegovina, Israel, Belgium and Great Britain. This resulted in a collection of 264 works in Velika Hoča and 57 works in Štrpce. An Inventory Book has also been made, but remained without any entries recorded – another empty promise.

The project was intended for multicultural, multi-faith and multiethnic populations living in special conditions, in isolated places, bereft of the possibilities of natural development, especially in the realms of art, culture and education. Due to the lack of educated, competent people locally, the president of the National Commission at UNESCO at the time suggested the work methodology of Ljiljana Bursać and the Art Forum as a program that the Government and the relevant ministries ought to adopt for the entire Kosovo and Metohija. Unfortunately, this idea did not come to fruition.

The objective of the program was to open possibilities regarding the work in the realm of culturological standards, that could be advanced in accordance with the contemporary tendencies in art, culture and education, thereby significantly contributing to the communication of the different, with the moto – art as a corrective; it could have been internationally beneficial for the Balkan region.
The Art Forum program contained a wide range of activities from the realms of arts and science as a function of raising the culturological standards and the preservation of the local population’s values and tradition. Starting from the revitalization of the basic life conditions in isolated areas populated by Serbs and other non-Albanians, the Art Forum strived to form a program that would meet the needs of people from all age groups, expertly designed and adequate for the given conditions and way of life.
Driven by this idea, an International Art Colony and a graphics atelier for young visual artists from Kosovo and Metohija were established, as well as workshops in contemporary arts, art history, sociology, ethnomusicology; creative workshops, performances and readings. Art and children’s artwork exhibitions were held in several cities in Serbia.
Although the projects were stopped in 2008, the results stand: a healthy foundation for the development of the young; an advanced relationship towards culture, art and tradition, despite the obstacles brought about by life in isolation. Had the project not been abandoned, the results would surely have been more visible, and the project would have taken hold across a much larger territory.

Ljiljana Bursać’s show is, therefore, a twofold memento: dedicated to an undertaking from hard times and its senseless abandonment. At the same time, the show transposes the entire project into gallery space as a kind of recapitulation, for consideration and contemplation in the present moment, twenty years later.

Ljiljana Bursać was born on October 27, 1946 in Kragujevac. She studied at the Academy of Fine Arts in Vienna, Austria, and went on to expand her education in the USA, Germany, France, Syria and Israel. She is a member of ULUS and ULUPUDS. She was a Youth Fund scholar in 1972–1974 and 1975–1977.
Starting in 1971, she has shown her work in 45 solo exhibitions and over 300 group exhibitions in Serbia and abroad. Her works are included in museums and galleries and private collections all over former Yugoslavia and worldwide. She is the founder and president of the Art Forum.
In 1999–2000, she did the performance “The Bridge of Light” in Kosovska Mitrovica.
Awards: Belgrade – Vuk award (2020), Belgrade – Autumn Exhibition laureate, ULUS – Lifetime Achievement Award (2019), Belgrade – Vinča Charter (2012), Piran, Slovenia – EX Tempore (1990), Mantua, Italy – Premio Nazionale A. R. Giorgi (1976), Mantua, Italy – Placetta San Benedetto Po (1976).

You can see the exhibition at the FCA gallery every workday from 9 AM to 5 PM. Admission is free.