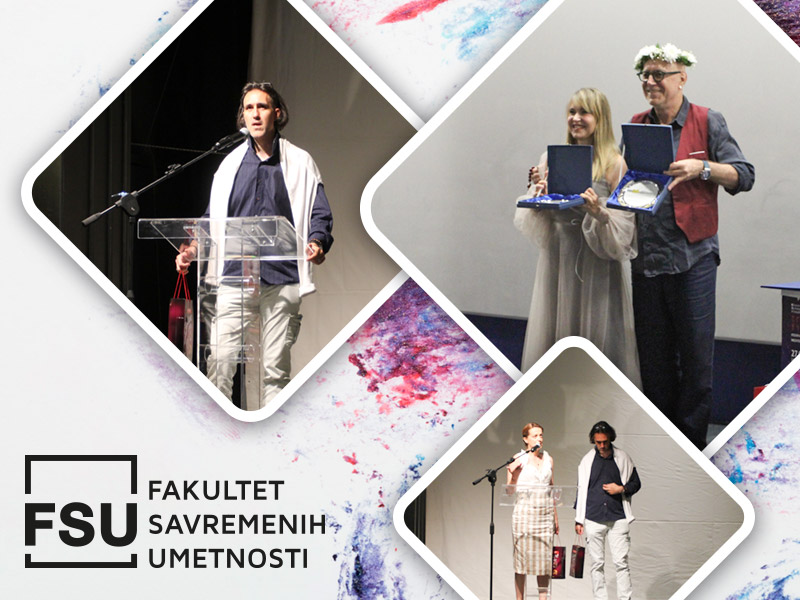 At the seventh iteration of the Mediterranean and European Film Festival in Trebinje, which took place from July 27 through August 2, the students and professors of the Faculty of Contemporary Arts represented their school in the best possible light.

The festival audience enjoys two screenings of ‘A Metronomic Mind’

‘A Metronomic Mind’, a short film made by FCA students of production, was shown twice at the festival, winning applause from the large audience. This fantastic piece directed by FCA student Emilija Filipović, which stars our famous actors Tihomir Stanić, Sloboda Mićalović, Viktor Savić and Nebojša Milovanović, showed that FCA students, with help from their great professors, are able to produce a complete cinematic piece.

Emilija Filipović and fellow FCA student Milica Nešković participated in the organization of the festival. The movies at the Trebinje film festival were shown simultaneously at two venues, Milica being responsible for the screenings at the Leotar hotel. Taking into account that this was the first festival performance for both the director Emilija Filipović and the producer Milica Nešković, the students passed this exam with the highest mark.

The Faculty of Contemporary Arts sponsored the event. FCA’s Petar Stanojlović, head of the Art Production Management and Media department was a member of the jury. In addition, ‘Momčilo’, a movie produced by Stanojlović and directed by Milan Popović, was also shown at the festival.

This feature documentary tells the tragic story of Momčilo Gavrić, the youngest Serbian hero from the Great War. The 32-minute educational movie reflects on historical facts through a war game, helping us understand the horrors experienced by the ten-year-old boy.

FCA received even more recognition in Trebinje. The great actor and FCA professor Irfan Mensur and his colleague Anica Dobra received the Golden Plane Tree, the award annually given for great cinematic contribution in Europe.

Around thirty movies were shown at three festival venues. The movies, both features and documentaries, were classified into the Mediterranean, European, Serbian and Herzegovinian categories.

The Faculty of Contemporary Arts is proud of its students and professors who played an important role at this great film festival with a seven-year tradition.