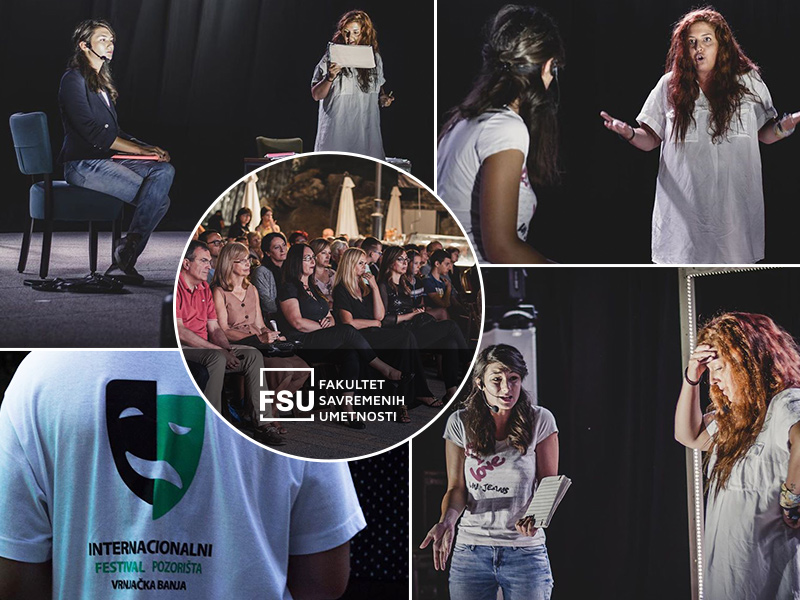 Faculty of Contemporary Arts has received yet another wonderful proof of recognition. The organizers of the International Festival of Theater, held in Vrnjačka Banja from July 25 to July 28, awarded the “Promenade” charter for our faculty’s immense contribution to Serbian culture and art.

The play “Oleanna”, performed on the first festival evening in front of a packed outdoor amphitheater, is a work by two fantastic FCA students, Jovana Todorović and Annamarija Serda, directed by their master studies professor Vida Ognjenović. The play is based on David Mamet’s late 20th century work; the examination performance by two students at the end of their second year of master studies of acting premiered on July 19 at the National Theater.

Jovana Todorović and Annamaria Serda did great on stage and brought Mamet’s games of power, manipulation and dominance over another being to full light in front of the audience.

“Professor Vida Ognjenović did this play with Svetozar Cvetković at the Atelier in the 1980s. We liked the fact that this work concerns all of us. Besides being a theater play and a way of educating young people, I think it is also a form of education for professors concerning the way we should view political correctness and the very purpose of its existence. There are few works like this. More and more people are leaning towards non-classical theater. However, it doesn’t all come down to loudspeakers and nudity. I think that speech-action is still indispensable,” explained Jovana Todorović, speaking for the “I Want (to Go to the) Theatre” portal.

“In our academic community, the way studies and education are viewed is often quite askew. The point is no longer in advancement, but merely in acquiring some sort of paper. They don’t think about the quality of the work, but about some objective. We wanted to send a message, loud and clear, that it is not the right way and what it can lead to,” added Annamaria Serda.

Theater is where the audience is 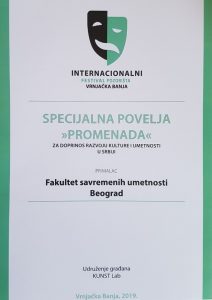 The main objective of the International Festival of Theater in Vrnjačka Banja was to bring theater to the people, rather than oblige those who are already interested to seek it out. Part of it was the concept of FCA students performing at various locations in Vrnjačka Banja, thereby attracting the audience to their play. The packed amphitheater speaks of their success.

The audience in Vrnjačka Banja enjoyed the three-day theater spectacle and already announced the intention to return next year. This festival was conceived in order to promote the decentralization of theater and cross the borders of the traditional. It is held every year, in the last week of July.