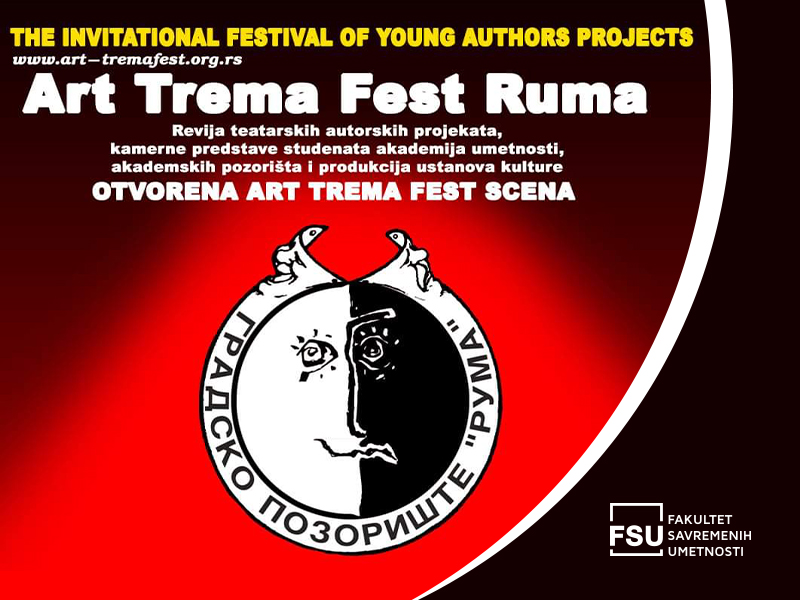 Students helped in the organisation of the Art Trema Fest

The 25th Art Trema Fest, an invitation-only theatre festival that promotes student art academies will be held between March 23 and 27 this year, at the cultural centre Brana Crnčević in Ruma. Students of multimedia production at the Faculty of Contemporary Arts contributed to the organisation of this year’s festival.

The festival is organised and sponsored by the Municipality of Ruma, the Provincial Secretariat for Culture, Public Information and Relations with Religious Communities, and the Ministry of Culture and Information of the Republic of Serbia.

The Festival will officially open on Wednesday, March 23 at 19.00 h, in the Great Hall of the Cultural Centre in Ruma, where the Theatre Museum of Vojvodina in partnership with the Heritage Museum in Ruma will open their exhibition Trifković in the Focus of Modern Audiences – The Choosy Bride-To-Be. Soon after, the audience will have the opportunity to see the first play in this year’s repertoire of the festival in the Great Hall of the Cultural Centre – Who Killed Janis Joplin? by the Serbian National Theatre from Novi Sad. It is interesting that the leading role is played by Bojana Milanović, an actress from Ruma.

Repertoire that sheds light on the position of subculture in art

The idea of the organisers and the selection committee of this year’s Art Trema Festival is nurturing civic values, and the selected plays aim to raise questions about our relationship toward the fate of artists, and the influence of rock and roll and subculture. Given that the existence of subculture helps maintain a quality culture, it seems that selecting the play Who Killed Janis Joplin? to open the competitive section of the festival was a valid and justified decision.
During the festival, Ruma will welcome the most important theatre institutions and troupes from Serbia and the region. In addition to the Serbian National Theatre, other theatres that will present their entries in the festival include Šabac National Theatre, Europa Prima University from North Macedonia, CIRK Pozor from Croatia, SPAM studio from Bulgaria, and the Faculty of Dramatic Arts from Belgrade.

Book promotion and closing play before the announcement of the winner

Visitors will also be able to attend the promotion of the autobiography Glavom kroz zid (Sailing against the Wind), and album Gastarbajter trubadur (Foreign Worker Troubadour) by Zoran Predin from Slovenia. You can also see the complete festival program on the official Facebook page.

The decision on the winners will be made by the expert jury comprising Tanja Bošković, Zijah Sokolović and Zoran Predin. The winner will be announced on Sunday, March 27 at 21.00, after which the Gymnasium Scene Ruma will perform their program How I went insane.