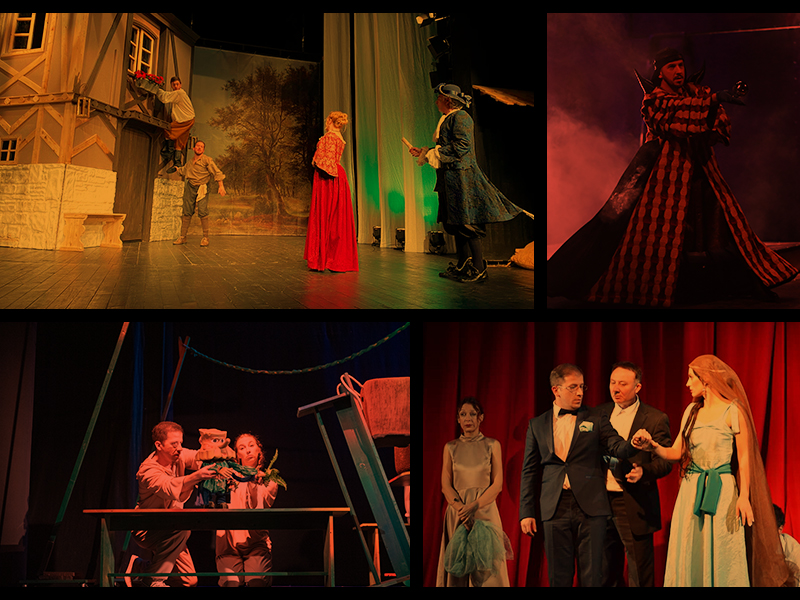 Three years ago, Marko Nikolić graduated from the Department of Acting in the class of professor Božidar Đurović, and after completing his studies at FCA, he became a member of the theatrical troupe in Vranje. In the past couple of years, Marko had the opportunity to play different characters in plays directed by reputable directors such as Jug Đorđević, Nemanja Savković, Stevan Bodroža, etc. The knowledge gained during his studies at FCA helped him bring to life a wide variety of characters on stage.

Professors Božidar Đurović and Hadži Nenad Maričić insist on thorough research of the writer’s biography and the era in which the play was created, and thanks to this practice that Marko adopted during his studies, he successfully performed the role of Kolen in the play “Žorž Danden”, directed by Nemanja Savković.

In the play “Nečista krv” directed by Jug Đorđević, speaking on stage and diction that Marko perfected at FCA came to the fore:

Since I assumed the role of the narrator in the greater part of the play, it was necessary for my diction to be perfect. When I enrolled at the Faculty of Contemporary Arts, it was quite difficult for me at first, as I had great problems with speaking on stage. However, professor Biljana Đurović was persistent and did not give up on me, as well as on the other students, until we mastered and perfected speaking on stage.

In the course Antiquity in the third year of studies within the Department of Acting, FCA students especially work on the techniques of voice setting, movement and speaking on stage, which break down verses and emotions. According to Marko, antiquity is not at all easy for any actor, since it differs from both comedy and drama. In the challenging ancient drama “Okamenjeno more”, directed by Stevan Bodroža, Marko played the role of Kalhas, which is the smallest role in the play. Thanks to Marko’s impressive performance, this role was noticed by both the audience and the critics.

Special attention is paid to stage movement in Acting studies, and the gained knowledge was especially valuable for Marko when bringing to life the character of the Scarecrow in the play “The Wizard of Oz”, directed by Aleksandra Kovačević:

This role required perfect stage movement from me. It was necessary to turn my body into someone else’s, into something that was not even human. At the Faculty of Contemporary Arts, we were given additional stage movement lessons by professor Marina Bukvički and professor Slobodan Beštić. Whenever I got stuck creating this character, it was enough to just remember the most basic things I learned.

We look forward to following the further career development of our student Marko Nikolić and congratulate him on his successes so far!