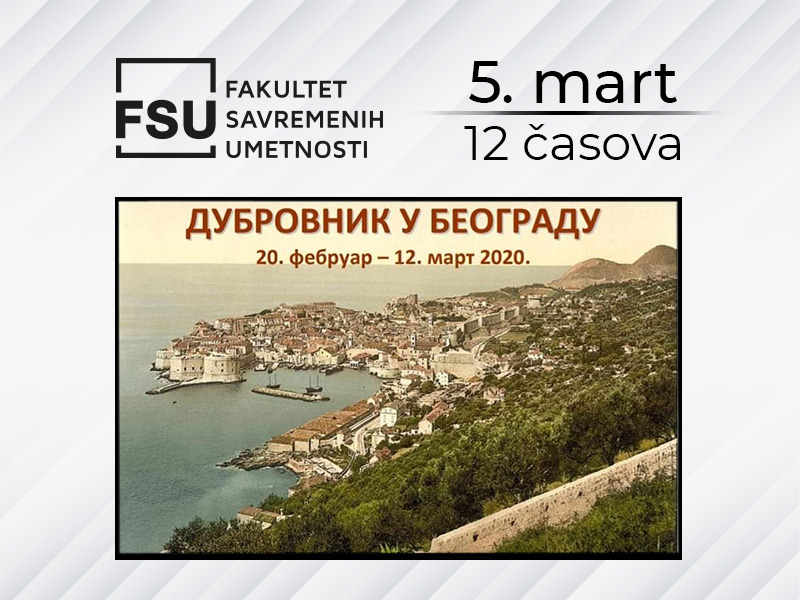 FCA professor presents her book at the ‘Dubrovnik in Belgrade’ event

On Thursday, March 5, starting from 12 noon, FCA professor Biljana Ćirić will promote her book “Politics and Ethics in Modern Dubrovnik Drama” at the Belgrade City Library (56 Knez Mihailova Street) as part of the ‘Dubrovnik in Belgrade’ event.

Professor Ćirić, who teaches creative drama reading and creative writing at FCA, will present her book at a panel which will also include FCA professor Božidar Đurović, Dragan Simeunović, professor at the Faculty of Political Sciences and Goran Maksimović from the Faculty of Philosophy in Niš.

A study which establishes the continuity of old Dubrovnik literature

“Politics and Ethics in Modern Dubrovnik Drama” focuses on dramatic works written in Dubrovnik in the late 19th and early 20th century which thematize the ideology of Yugoslavism and establishes the continuity of old Dubrovnik literature. This study, which makes a major contribution to literary historiography, moves the boundaries of Dubrovnik literature by almost a century.

Analysis has shown that the dramatic texts rely on old Dubrovnik literature in terms of the motifs and topos of the political culture in Dubrovnik. A new feature in relation to the literature of old Dubrovnik is the ideology of Yugoslavism, which is portrayed in the plays in the context of the altered historical circumstances and the loss of freedom in Dubrovnik.
Along with the voices of power, the works also contain the voices of ethical opposition which question the legitimization of revenge and human casualties in the name of ideology. The texts which lack this ethical voice represent a political discourse of low artistic value.

If you would like to enjoy an interesting discussion on Dubrovnik literature, come to Belgrade City Library on March 5.