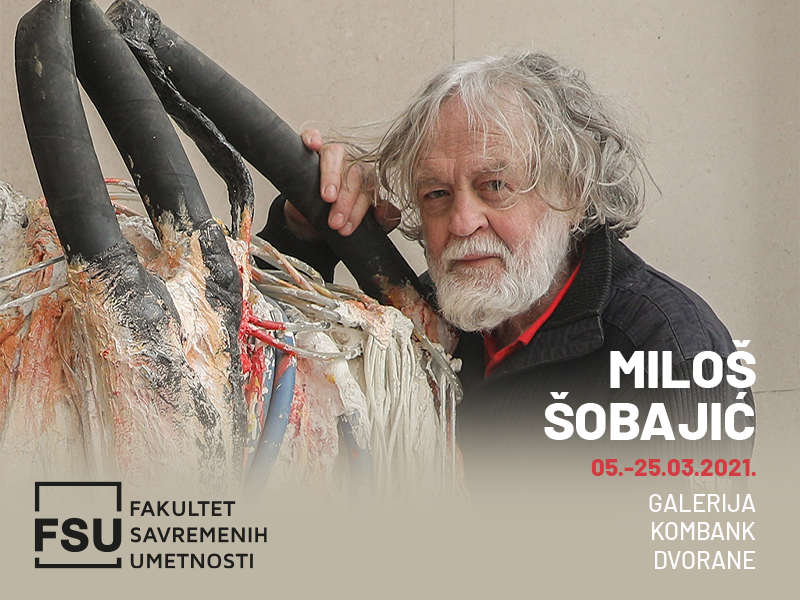 Professor Emeritus at the Faculty of Contemporary Arts and the greatest Serbian contemporary painter, Miloš Šobajić, opened Kombank Art Hall with an exhibition of his paintings. The ceremonial opening took place on Friday, March 5, and the exhibition will be open every day until March 25.

As part of the exhibition, the author also presented his book My Nine Lives on March 15, at 3 pm.

This exhibition of this outstanding artist will present seven monumental paintings created in the last decade, as well as the painting that helped him distinguish himself as an artist in his early Parisian days. The exhibition will also feature three sculptures that have been exhibited throughout Europe.

These artworks will remain part of the Kombank Art Hall permanent exhibition as a special tribute to the greatest contemporary Serbian painter.

The Russian State Duma awarded him the Order of the Guest of Honor of the Russian Federation when he became a member of the Association of Artists of Russia. He has won a number of other awards and decorations: Golden Order of the Republic of Serbia for achievements in art, Vuk Award, Golden Link awarded by the City of Belgrade, Miša Anastasijević Award, etc. Nearly seven hundred articles about Miloš Šobajić have been published so far in the French, Italian, Serbian, American, Japanese, Greek and German press, as well as a number of TV movies and coverages.

The works of Miloš Šobajić have been the subject of five monographs published in Paris, Belgrade and London, where the introductions have been written by Alain Jouffroy, Peter Handke, Edward Lucie-Smith, and other authors. His solo exhibitions have been organized by some of the most prestigious institutions, museums, and galleries in the world – from Paris, Rome, Brussels, to China, America and Russia.

The Miloš Šobajić Museum is to be opened in Belgrade in 2021.

Visit Kombank Art Hall and enjoy the art of one of our best painters of all time.