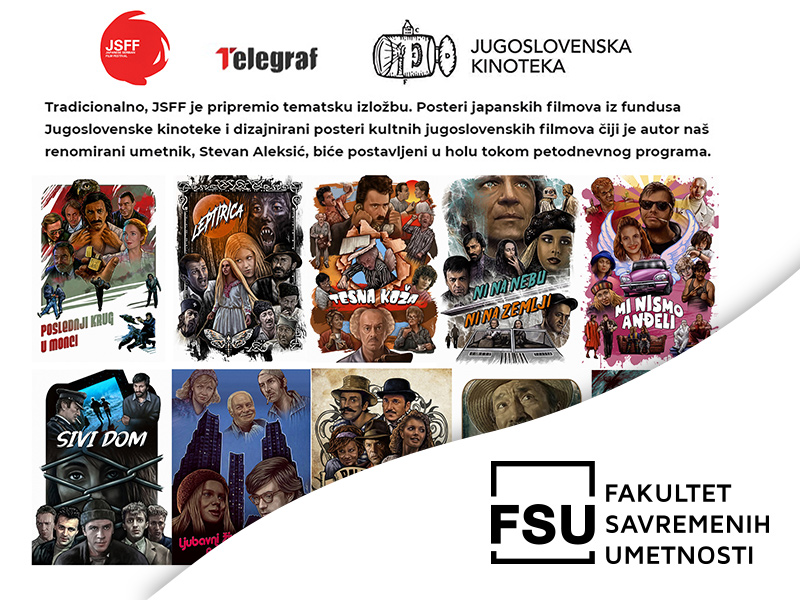 Professor at the Faculty of Contemporary Arts, Stevan Aleksić, well-known to the public for the posters he designs for blockbuster movies, will have an exhibition at the Japanese Serbian Film Festival which will be open from November 12 to November 19 in the Yugoslav Film Archive (Cinematheque) building.

The movie poster exhibition will be part of a themed evening where visitors will also be able to see the posters for Japanese films from the Yugoslav Film Archive’s collection, as well as illustrated film posters for Yugoslav films designed by our renowned artist, Stevan Aleksić.

I am honored to be invited by the wonderful team of the Japanese Serbian Film Festival to take part in the event with an exhibition of my illustrated film posters. Actress Jovana Stević, the Festival director, has been following my creative work for years, and her official proposal that one of the opening acts of the Festival should be the exhibition of my illustrations, made me very happy.

Given that the name of the exhibition is Homage to Japanese and Yugoslav Cinema, the Yugoslav Film Archive displayed ten original posters for Japanese movies shown in the old days of our former country, followed by a selection of twenty posters that I drew in the previous five years, and which cover the period between late 1970s and early 1990s.

With these films that I breathed new life into, the Festival wants to present the cinema of a country that no longer exists, but which left a legacy of cult movies, great directors, and unique movie stars such as Milena Dravić, Dragan Nikolić and Bata Živojinović to the visitors from Japan, and our own youth, says Stevan Aleksić.

The exhibition will be open in the lobby of the Yugoslav Film Archive’s new building (Uzun Mirkova Street 8) all five days of the festival.

Do not miss the opportunity to enjoy this unusual exhibition.