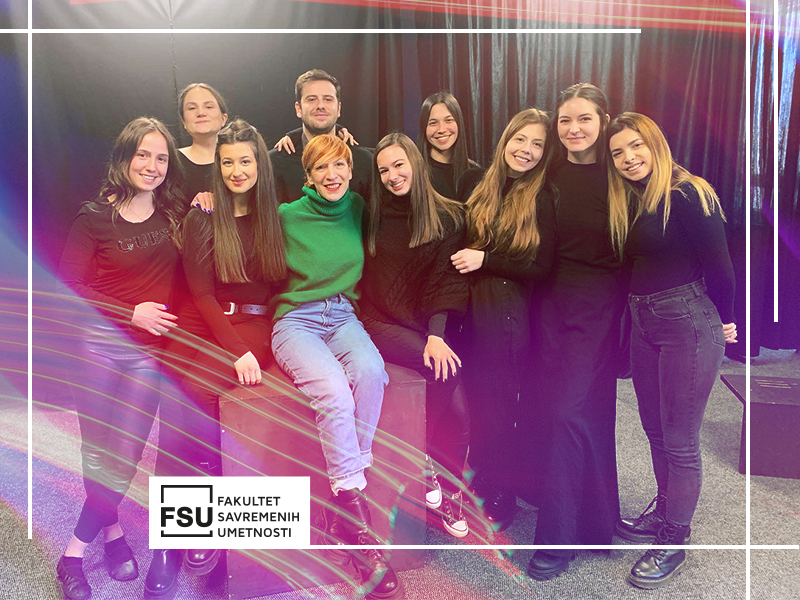 Students from the Dramatic Arts – Acting Department at the Faculty of Contemporary Arts had the honor of performing at the Vukova Zaduzbina awards ceremony. Dressed in Serbian traditional clothing, they recited the verses of this year’s laureate, Jelena Kovačević, who received the Vukova Zaduzbina award for the book of poems “Stradanje”. The award was also presented to Dr Marko Nedić for his book of essays on Serbian prose “Kritički opisi”.

Entering the building of Vukova Zaduzbina is an honor for anyone who has a strong feeling about the tradition, culture, language, folk and folklore heritage, as well as famous ancestors. The space itself gives away a strong sense of centuries-old national treasures – invisible, intangible, but tangible in the depths of our souls, and our Serbian soul is full of “sadness, wounds and pain”, as Jelena Kovačević said in her thank you speech.

In her collection of poems, the author spoke about the suffering of Serbs from Jadovno and Jasenovac to Prebilovci and Drina, supporting everything with documents. Her expression in every poem is the cry of Serbian souls, with the hope of resurrection. It was not easy to confront students, those young people of the 21st century, with such ferocious and cruel crimes described in these verses.

It was not easy to maintain emotional control, identify with the suffering Serbian people, defending their strength, faith, dignity and pride with my own interpretation. All this was achieved by Andrijana Draganić, Jana Dekanski and Jana Salamadić, students completing their Master’s degree in Dramatic Arts – Acting, together with assistant Nikola Ugrinović and professor Biljana Đurović, who specially prepared a poetic and stage performance for the occasion, dressing all the actors in Serbian folk costumes from the mentioned area.

With their sublime interpretation of Jelena’s verses, the students of the Faculty of Contemporary Arts caused sighs, but also silence, pain and tears from the majority of those present, and thus once again confirmed that the Art award of Vukova Zaduzbina has fallen into the right hands of a poetess who creates by listening to the national soul.

A new meeting between students of the Faculty of Contemporary Arts and the suffering poems of Jelena Kovačević is scheduled for October 19 at the Student Cultural Center at 7 p.m., when the award-winning book will be presented, and the students will surely always remember their first meeting with the poetess. Jelena Kovačević was a guest at the Public speaking exam, where third-year students of Dramatic Arts – Acting from the class of professor Božidar Đurović recited her poems as part of the exam program. With the excellence they showed, they opened the doors of Vukova Zaduzbina for themselves.